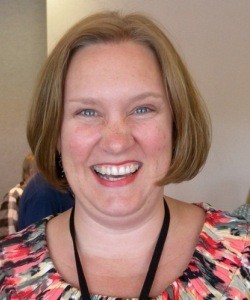 Michele Caskey, USA: Eight years ago, I was an aspiring comedienne constantly working on jokes, trying to find the punch line. Laughter had begun to invade my every day existence and I was a little obsessed with making people laugh. I was laughing with friends, co-workers, and even the random person on the treadmill next to me at the gym. I noticed something interesting about people when they were laughing – they immediately became more alive, vital and engaged. Long held memories were triggered, they blushed, they looked me in the eye and I started wondering what was happening inside of them specifically when they laughed.

Some quick research led me to discover Laughter Yoga. I thought it was fantastic since as a fledgling comic I still wasn’t particularly good at getting anyone to laugh for a reason. I felt that Dr. Kataria’s method could help me and made plans to attend the next Laughter Yoga Leader training offered in the USA.

In preparing for the class I read Dr. Kataria’s book Laugh for No Reason. The book describes some basic laughter exercises practiced around the world. Try as I might I just couldn’t picture it and started to worry that maybe I would not be able to do this. Maybe I wouldn’t be good at making anyone laugh for a reason or for NO reason either. The more I read the more I thought “you’ve got to be kidding.” I just couldn’t see how this was all possible let alone how it could lead to healing or world peace. With a certain amount of anxiety and doubt I set out to be trained as a Laughter Yoga Leader.

What was immediately clear was that I had a lot of pent up laughing inside of me. Once I uncorked my lid, laughter flowed out of me like a fountain. It was ridiculous and fabulous. I learned about the positive effects laughter has on the body and mind and why there are scientists who believe it could be a missing link to curing disease. It all made so much sense. Even though we started laughing for no reason it quickly turned to what I would consider real laughing. I found the laughter exercises enormously amusing and I felt good, young and enthusiastic about life in general.

I returned home energized and motivated to use laughter to help my community thrive, which quickly led to my first laughter club at the Seattle Cancer Treatment and Wellness Center. My laughing people were undergoing the rigors of chemotherapy and other treatments in an effort to save their lives. This laughter club was pretty serious business. They would come to the group exhausted, worried and nauseous and after an hour they were beaming, smiling, laughing and lifted. I wasn’t convinced that laughing could cure their cancer but what was obvious to the naked eye was that they each had a stronger lease on life after an hour spent laughing like this. If the shift in seriously stressed people was so obvious and relatively easy to achieve then it was overwhelmingly exciting to consider the ramifications of spreading this out into the community at large. I agreed with Dr. K – this practice could seriously change the world.

I continued teaching Laughter Yoga, often to pretty serious people. I moved to New Mexico and found myself laughing less and less in my everyday life. I had almost entirely forgotten how to be silly and had become downright sad by the time I enrolled in Dr. Kataria’s advanced Laughter Yoga Teacher Training in Albuquerque. From day one he encouraged us all to laugh for 20 minutes each morning for no reason, since obviously we can’t teach what we don’t know. Ever since that day I have been getting up in the predawn darkness to laugh by myself. It is perhaps the silliest thing I have ever done. I make quite a scene there by myself, laughing at a crowing rooster, or a star falling from the sky. I carry on as if something hysterical is happening – all before 6am.