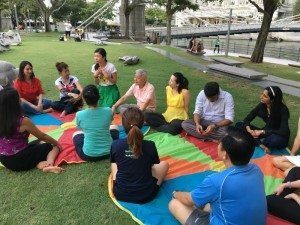 Yvonne Looi, 33, a Laughter Yoga facilitator has helped thousands of people in Singapore, like executives and retirees to laugh their way to reduce stress levels and find greater happiness.

Unlike many yoga sessions held in studios, Looi conducts two free Laughter Yoga sessions every month by the Singapore River outside the Asian Civilisations Museum. During her sessions, the participants to warm up by introducing themselves to one another, clapping, and holding a conversation. The fun part begins when they begin moving in pairs, in circles and swiveling their waists, while laughing out loud at the same time.

Calling herself a joyologist, Looi said that regular Laughter Yoga sessions can bring health benefits to participants such as lowering the risk of diabetes and improving blood circulation. It even makes one look younger and happier and happy people live longer she said.

Looi chose to reach out to executives who are caught up with the daily grind of working life and are very stressed out. Work can be a very serious and stern place. Some of them told me that sometimes they dont even laugh or smile the whole day. So these sessions are really good for them, Looi said.

Alvin Lim, 42, who works in a bank, feels more refreshed physically and mentally after attending several Laughter Yoga sessions conducted by Looi. It helps me to manage my stress at work and at home, I have friendlier interactions with people and have less temper, he said.

Living up to her mission to bring joy to the masses, Looi has managed to attract participants of diverse age groups. Among them is 76-year-old retiree Morris Ng, who decided to attend Laughter Yoga sessions regularly after trying it once. Its something new for me to try. It makes me feel youthful, healthier, less stressful, and I get to know new people, Ng said.