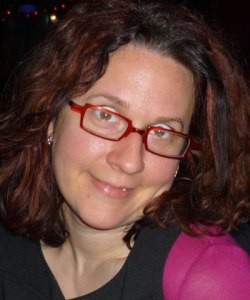 Lynn Perreault, Canada: For many years, I have been teaching about the many benefits of laughter to my university students. To demonstrate my point, I would teach students the basic rules of comedy, play some games together, and then we would laugh. However, some students felt too nervous to perform and others were concerned they were not funny. I spent more time addressing students’ concerns than I did engaging them in laughter.

I was in search of a way to have students laugh without jokes or games. In summer 2007, I presented a comedy workshop at a women’s retreat in Pelee Island, Ontario. I also attended a class titled “Laughter Yoga.” I had finally found my solution, and just in time!

Within days of discovering Laughter Yoga, life brought me some extreme challenges. In July 2007, my spouse of 4 years turned to another woman. I started my life all over again while simultaneously juggling a brand new job that was exceptionally demanding. At the same time, my mother was diagnosed with colon cancer, but fortunately she survived. In September 2007, I also became very ill with a painful muscle disorder which affected my heart and gastro-intestinal systems. I was in and out of hospital for several months. My body was not responding to traditional medication and therapies and, by 2008, I was searching alternative roads to healing. Laughter Yoga was very much on the top of my list.

Practicing Laughter Yoga and leading laughter sessions has helped me to thrive in times of hardship. Laughter Yoga has helped to alleviate the symptoms of my illnesses. I feel less pain, I sleep better, and I have developed a more positive attitude. I have found joy despite hardship, and am enjoying the company of many other joyful people.

Recently, I underwent a third surgery which required 3 months of physiotherapy to recover. I held my fiancé’s hand while he was trapped and suffered injuries in a violent car crash. I lost my job, and all the while, I stood by my future mother-in-law’s side while she fought with a painfully debilitating last-stage spinal cancer and then died. Knowing fully well I would need extra strength to get me through all this, I decided to become a Certified Laughter Yoga Teacher.

Because my fiancé and my own mother are cancer survivors, I am sometimes reminded that they may be faced with cancer again. But instead of worrying or getting depressed about it, we all laugh together. Laughter Yoga has given me a new understanding of life during lemon season. When life throws you lemons, it’s not about making lemonade. I no longer need to make lemonade and I no longer need to see a positive turnaround to laugh. When life throws me lemons, I just laugh!