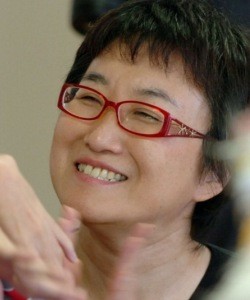 Yoshiko Takada Japan: In January 2009, I concluded the Laughter Yoga Teacher Training in Mumbai, and came back to Japan. The next morning, at 6.40am, I started a Laughter Club at a small nearby shrine. I have never stopped laughing since then.

In Japan, it is common for small groups to gather in the morning to practice a 10-minute exercise along a daily radio program. There is one such group at Nezu Shrine, and I scheduled my Laughter Club to start just after the radio program. At first I was laughing alone, then a friend joined me and we were two for about 2 months. Then the group started to grow. We are about 10 now and laugh every day except when it is raining.

Soon after returning from Mumbai, I founded the Japan Laughter Association, and one month since becoming a laughter teacher, I started organizing Laughter Yoga Leader programs, not only in Tokyo, where I am based, but also in other cities where we have Caring Clown friends. At present, we organize up to three Certified Laughter Yoga Leader Training Programs every month in various parts of Japan as well as many workshops and programs for companies, yoga studios, local health care programs, and homes for people with disabilities.

On my 25th birthday, I decided to quit the company where I was working as an architect to establish my own company to pursue my own interests. This move has set the course of my life. Initially, I produced various entertainment events, inviting guests and performers. Among them was Dr. Patch Adams. From 2000 to 2007, I produced lectures, workshops, and hospital clowning events for him and training programs for caring clowns.

Laughter Yoga is my favorite field of work today and I am convinced that it is very much needed in Japan, where life expectancy is the longest in the world. My work as architect and producer have been rewarding and enjoyable, but Laughter Yoga is different: What I do now is something really necessary for Japanese society. Now I feel both pleasure and a special sense of fulfillment, knowing that this is something truly needed.

Before starting Laughter Yoga, I was spending most of the day at the desk. I had stiff shoulders and was always anemic. I needed acupuncture treatment three times a month, but now no more. Twenty minutes of laughter every morning has softened my muscles, and the pain in my left knee was gone six months after starting Laughter Yoga. Before, I suffered from coughs for several weeks after having a cold. Now I don’t even catch a cold. I can even run up the stairs. The morning laughter sessions have become a habit, and when I skip it for some reason, I feel uncomfortable. People say I have a good voice, I can talk for long hours, and a lot of people think I am younger than my age, 52. All of this is thanks to Laughter Yoga.

Recently, I led a group of caring clowns to a camp in Northern California where I felt myself changed. I am an active person by nature, but had never really been interested in performing or expressing myself. At the camp, however, I truly enjoyed dancing, singing, and playing instruments. Although I was bringing a group of people, I didn’t feel stressed at all, and was able to enjoy myself too. At work, I have a lot of problems and challenges, but laughter always helps me to find a way to solve them.

My dream is to create a community where people can live smiling and laughing. Laughter Clubs are laughing communities. I hope to see at least 10,000 Laughter Clubs in Japan in 10 years’ time – one club for one junior high school district. At age 50, I found Laughter Yoga. I also found in Laughter Yoga the right way to realize my dream. Now I know that all my work and experience as architect, as entertainment producer, and all my studies and researches, were for one purpose: to make the people of Japan live with happy laughter.