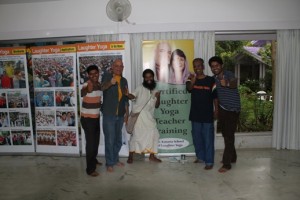 Deepak Shah, CLYT: It was in 1997, when I first read about a Laughter Yoga Club in a Gujarati news paper in Mumbai and got curious to know more about it. After few months, I was fortunate to join one which started in a nearby ground. The first day, after the laughter session, was unforgettable. I went back to my office and started smiling and laughing. My body had never experienced these laughing sensations. Feeling greatly inspired, I started attending the Laughter Club regularly and became the anchor person there. In fact, our club became one of the best Laughter clubs in Mumbai. This changed my entire personality. It brought positivity, and gave me the courage of speaking in public by breaking inhibitions, good interpersonal relationships, and creativity and opened the door to spirituality.

I even felt the change in my business and professional setup. Initially, I was working with three people with very little turnover, but after joining the Laughter Club, the number of people went up to 10 and the turnover increased five times! Laughter Yoga gave me the ability to put faith in subordinates, train them for better perspective and also a feeling of intimacy with the company, thereby increasing potential and productivity. As I was able to delegate my subordinates, it gave me more time for personal growth. I joined a yoga teacher training course and become a yoga teacher and even learnt thePatanjali's Yoga sutra, which I had never dreamed of!

Laughter Yoga for Personal Development Through 14 years of my journey, I learnt that laughter is the ultimate thing in life. Laughing is a habit that one needs to instill within oneself in order to cope with the miseries of life in a much better way. Happiness and joy do not come from external things; instead it is an outcome of our perspective and positive attitude towards life and people. Laughter is the ultimate surrender and acceptance of the world as it is. It gives me a feeling of oneness with the world and makes me forget the I, me and myself pattern of thinking, thus bringing down the ego. Laughter can lead one to the highest stage of yoga i.e. Samadhi (Trans-meditation).

And it starts with ho ho ha haaa!