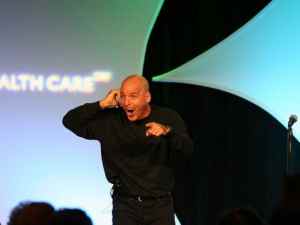 Laughter Yoga today has become a worldwide phenomenon with millions of people incorporating laughter into their exercise routines as a way to release endorphins, eradicate stress, and increase blood flow- even if there's nothing funny to prompt a laugh.

Emily Gold who has been teaching Pilates and Total Body Resistance (TRX) classes in Pensacola for years attended a local yoga class conducted by Dr. Michael DeMaria, who has incorporated 1 minute of laughter in his regular exercise regime.  It was fun and interesting, after the initial awkwardness fades away. The first 30 seconds I was completely forcing myself to laugh, but then the endorphins started to kick in and I felt very happy to be laughing - it was such a release, said Emily"

DeMarias class emphasizes on participants connecting with their inner child. As an integrative psychologist, and yoga and meditation instructor, he offers a holistic approach to health and wellness. After receiving a positive response from the incorporation of deep laughter into his yoga class, he started a club in order to focus solely on the healing powers of laughter, the Gulf Coast Laughter Club.

The club holds two sessions each month, which consist of 15 minutes of laughter variations, which help to decrease adrenal and cortisol levels in the body, while increasing feel good neurotransmitters, like serotonin. The first few minutes often begin with fake laughs, which slowly become genuine as people become comfortable with laughter exercises. The aim is to bring laughter, happiness and peace of mind to the Gulf Coast," said DeMaria  as it is a wonderful practice that has changed the lives of tens and thousands of people around the world.