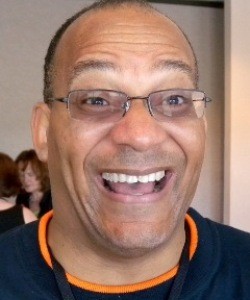 Stephen Findley, USA: I work as a Staff Chaplain at the University of Texas at M.D. Anderson Cancer Center in Houston, Texas, the number one cancer research hospital in the world. In 2006 the theme for National Pastoral Care Week was “Healing Humor”. I was in charge of the event and organized a “Healing Humor Worship Service” in the hospital Chapel which received rave reviews from patients, caregivers, and medical staff. In 2007, I attended a Laughter Yoga workshop with a colleague of mine Christiana in Dallas, Texas.

During the session, I found myself laughing, playing, and having fun in a dynamic way with a group of people that I had just met. I experienced emotional release, a greater sense of well being, playfulness, and joy as I clapped, laughed, played, and went through the breathing and stretching exercises. As the 2-day workshop came to a close, I knew I had discovered a discipline that would bring joy, health, and wellness to others.

As a chaplain in a cancer hospital, I was interacting on a daily basis with patients, caregivers, and staff that were impacted by loss, grief, despair, anxiety, and the fear of death. It doesn’t get much heavier than that in my world. Christiana and I both thought, “What better a place to bring Laughter Yoga than to a cancer hospital”? So, when we returned to Houston we both decided that we wanted to launch Laughter Yoga as a healing modality at M. D. Anderson Cancer Center. I began to offer Laughter Yoga sessions to nurses, medical staff, administrative employees, and from there to patients and caregivers. Laughter Yoga became an offering at the Place of Wellness where I lead Laughter Yoga sessions for patients and caregivers on a regular basis. I also started being invited to present Laughter Yoga to the general public through community organizations in the Houston community.

I found that leading Laughter Yoga sessions was of great personal benefit to me as well. Due to the serious nature of my work, I found that Laughter Yoga was rejuvenating for me as well. It became an arsenal in my own self-care in that leading the sessions allowed me to release my own inner tensions, connect with others in a non-verbal manner and joyous manner. I was happier and more energized after a laughter session and found that I felt more alive and responsive to my self and to others. Laughter Yoga gave me a balance that I needed in terms of the serious and intense work that I do as a chaplain.

What’s more, the impact of Laughter Yoga on my patients, caregivers, and staff was amazing! Once, after I had led a Laughter Yoga session with a group of nurses. Afterwards, one of the nurses said to me, “I feel like I just had a workout at the gym. I feel so energized; I can go back bow to the floor and get more work done with more energy.” One day I was on my way to a meeting and an employee who had attended one of my Laughter Yoga sessions stopped me to say hello. Then she told me that during the Laughter Meditation she had remembered what her purpose in life was and she thanked me for bringing Laughter Yoga to her department. I was floored after that. I had no idea that Laughter Yoga had impacted her on such a profound level.

Another person disclosed to me after a Laughter Yoga session that her husband had died a year ago and that she had not laughed since. She said, “In fact, I did not know if I could laugh again.”

Now, she had just spent the last twenty to thirty minutes laughing during our session. I looked her in the eyes and simply said, “Well, you’ve still got it.” Recently, after leading a Laughter Yoga session, I went around the room and asked the attendees to give their feedback. One woman said, “All I know is that when I arrived here today by airplane, I had this huge weight on my shoulders and now it’s gone.” Another said, “My whole body is smiling right now!” And still another said, “I feel lighter, more energized, and happy.” Once, I was invited to lead a Laughter Meditation at the Rothko Chapel with eighty people in attendance. Afterwards, a Presbyterian Minister came up to me and said, “My entire life changed today due to that Laughter Meditation!!” “I want to become a Laughter Yoga Leader!!” “Where do I sign up for the training?”